If you ever had even a short chat with me, you know that I’m addicted to flying, may it be 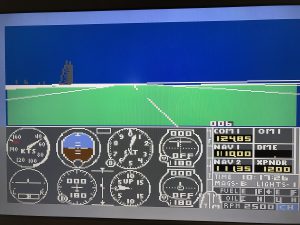 real planes or my modern and full featured flight simulator. Recently I discovered “the c64 mini”, a half-size replica of my first real computer (not mentioning the VC20 for now), the awesome Commodore 64 with it’s “38911 basic bytes free” as stated always when powering on. So what has the C64 and my flight sim addiction in common? Well, back in those years I fell in love with flight sims – exactly with this sim on the c64. While my current simulator needs all the expensive stuff and is not even really satisfied with it’s 16GB of RAM (the C64 has 0,000064GB) this can be called a huge difference at least in technical terms. 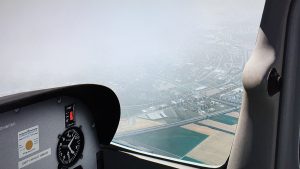 Letting myself flow through the old times, I can’t really remember that I set any of these gauges to the right value or even checked anything before flight. I just started the simulation (don’t call it a game) and flew. Easy as that. Today’s sims are absolute realistic, at least in a way that it takes ages to fly. Need to check this, need to adjust that – as in real life, which is a good deal at least for real flight training. And for sure the graphics is a thousand times better these days. So why is the old-school sim so appealing to me? Because it’s the date where everything began and it worked wonderfully if you keep in mind that it had just (or even less of) the technology that today runs on a thrilling cheap Raspberry Pi or even the Apple watch on your wrist (which is a bit less of thrilling cheap).

So if you want to stop me talking about planes just grab a flux compensator, apply 1.21 Gigawatts to it, go back to the 80s and stop me :).