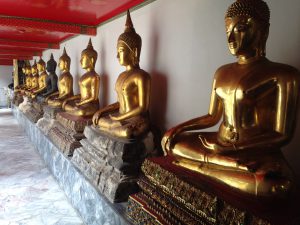 I started meditating just once in a blue moon many years ago, but didn’t really practiced it until I had a quite stressful phase last year. Meditation, I expected, would help me to cope much better with the situation. More by accident I stumbled upon a “365 days” group within my newly downloaded app Insight Timer. I like challenges, so I opted in. It needed some consciousness to keep up, but after the first days it became easier. Soon, these 20 minutes a day became part of my life.  While going this way, I met some companions from different countries and cultures. Most of the time it was just enough to point out “Thanks for mediating with me”, which is also a feature within the app. I felt being together with millions of others who experienced the same. I will definitely continue, even after reaching the goal of 365 days. It helped me a lot and still does. You might ask if meditation is the right thing to do. I cannot say for you. The good thing is, you don’t have to buy expensive stuff, nor have to drive a long way to a certain place to practice (although I really can recommend some places like the Antbear Lodge in South Africa). So, just try. Be patient. Mediation is no Hocus Pocus, it’s said that the brain will change as soon as after six weeks of meditation and it can be shown even with an MRI.